You are here: Page 2 Gadd Family - Powell and Emma Gadd. Go to  Page 1 Gadd Family - Andrew and Delilah Gadd   Page 3 Gadd Family - William H. Gadd   Page 4 Gadd Family - The Martins
Page 5 Gadds in the military
GADD AND MARTIN FAMILIES OF VIRGINIA AND WEST VIRGINIA
Powell Wade Gadd and Emma Melissa Martin
Ordie Robert Vest, Dorothy M. Gadd Epling, and Robert Lee Gadd. Go to In Memory page.
Updated June 14, 2021
Gadd -- origin of surname. "English - occupational; from Middle English meaning 'goad, spike,' referring to a cattle driver."  (“The Wordsworth Dictionary of Surnames,” Terry Freedman & Iseabail Macleod, 1997, Wordsworth Editions, Hertfordshire, Page 89.)
Powell and Emma Gadd -- a short biography (PDF in Dropbox)
Powell Wade Gadd, son of Andrew Powhatan Gadd and his wife Delilah Ferguson (See Gadd Page 1), was born 15 Sept 1853 and died 26 July 1924, in West Virginia.  WV Project birth record. He married Emma Melissa Martin, daughter of Adam Martin and wife Rebecca Scott.  According to entries made by daughter Emma Stella in two Bibles, Emma Melissa and husband Powell had the same birth date: 15 Sep 1853. In a 1974 letter, granddaughter Frances Hatcher Gramm said Powell was born on 15 Sep 1853 and Emma Melissa on 14 Sep 1853. Emma died on 17 Aug 1921.
Photos: Powell, Emma Melissa and unidentified child.  Powell and Emma Melissa.
For more about Emma's family, go to Page 4 Gadd Family - The Martins.
Powell and Emma and son George are buried in a cemetery "located on the John Hudson farm, which was the original Spangler home," according to information in the Tallery Mountain chapter of A New River Heritiage, Volume II, by William Sanders, McClain Printing Co., Parsons, W.Va., 1992, Page 208-209.
Find A Grave Memorial 91894149 and 91894853.
Stories about Powell Wade Gadd:
Daughter Emma Stella said Powell had a red beard. When Stella had her first child, son Dewey Via, her parents assisted her. She sat back in her father’s arms while her mother helped her grandchild into this world.
Powell had a sense of humor and was a bit of a trickster. One of his granddaughters remembers how he would ask her to get him a cup of cold water from the spring. He told her that only she knew how to fetch his water just right.   In a March 1992 letter, Nina Vest Bennett Worley (Stella and Leonard Vest's daughter) wrote about her grandparents, Powell and Emma Gadd:
Well, I have to tell you a little about my Grandmother & Dad, Gadd. They always went to church. Rode in a wagon. The horses had to be curried and clean. They wore gloves to church in those days, up to their elbows. One time mother (Emma Stella) didn't put any on because there was a hole in one finger of a glove. Grand daddy noticed, made her go back and put on her gloves and told her to be sure and get some from the store and have a pair extra in case she had a bad pair. They were Methodists. Mother was saved when she was 16.
Party at Annie's House. In 1959 Annie Gadd Turner invited her sister Stella Gadd Vest, her nieces and a nephew and their families for a get-together. Lots of pictures were taken. (Pdf in Dropbox. You can download the document  by clicking on "Download" in right corner of Dropbox page.)
Children of Powell Gadd and wife Emma Martin
Go to  Page 1 Gadd Family - Andrew and Delilah Gadd
Page 3 Gadd Family - William H. Gadd  Page 4 Gadd Family - The Martins
​ 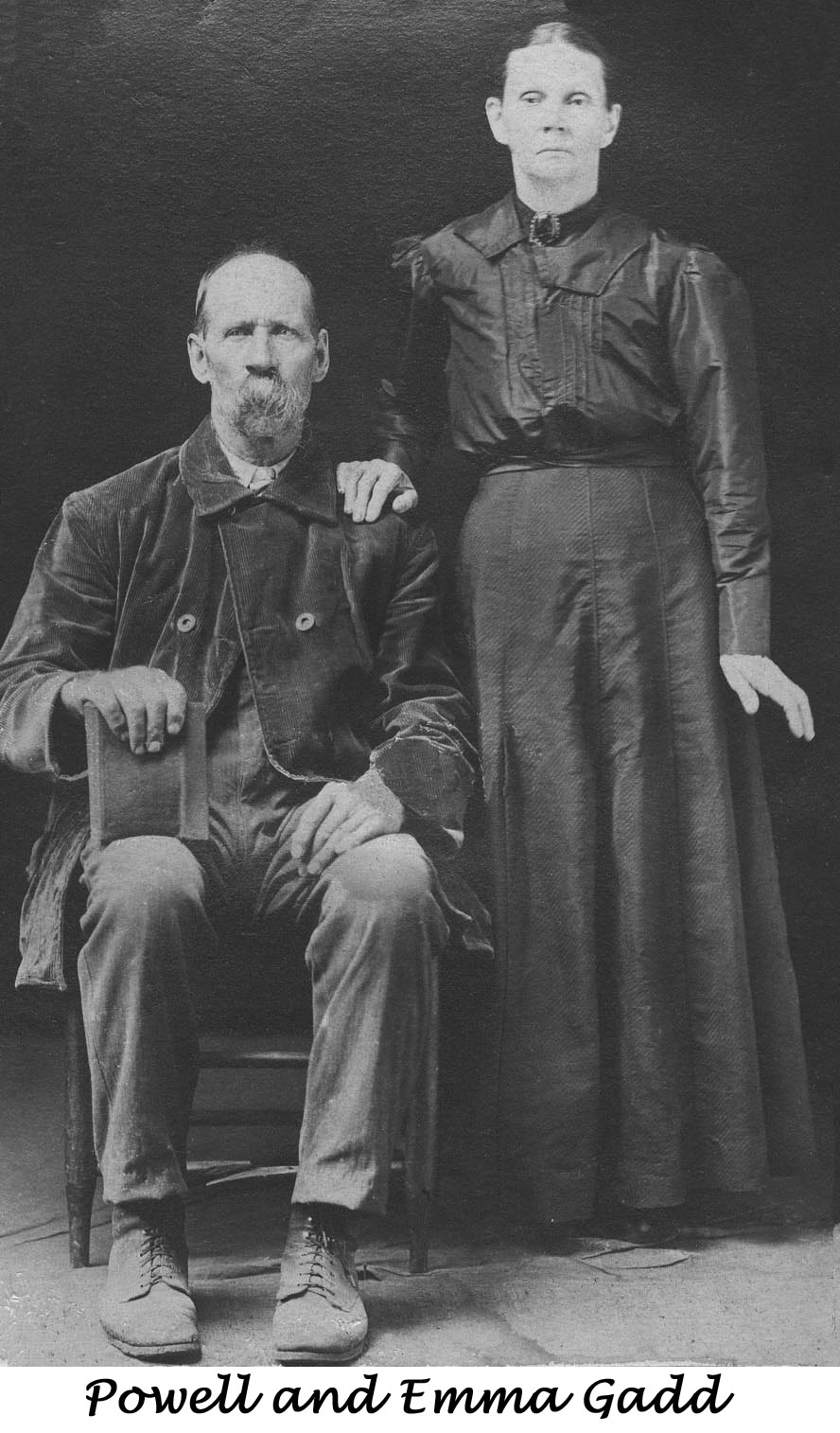